The Grand Design Momentum M-Class Toy Haulers for Sale Denton Little Elm Flower Mound TX is your best bet If you're looking for a lightweight toy hauler that doesn’t shortcut luxury features. The attributes of the Momentum and the M-Class are extremely comparable to one another and share a lot of common amenities. In spite of the fact that it is lighter than the Momentum, which increases the availability of tow vehicles that can be utilized, it is not light when it comes to showering its owner with luxury and giving the capability to live off the grid. The M-Class provides its owners with a wide choice of outdoor exploration options thanks to its six various floorplan configurations, double or triple axles, and lengths ranging from 38 to 44 feet. The M-Class is well-known for its spacious garages that can accommodate all of your toys, but it also boasts lavish facilities in the other rooms that will make your stay comfortable no matter where you are. You may go for a desert racing or go skiing in the Alps, and the Momentum M-Class will make each of these activities feel like a comfortable extension of your own home.

The 2023 Grand Design Momentum M-Class Toy Haulers for Sale Denton Little Elm Flower Mound has six distinct floorplans that provide owners a lot of freedom when it comes to traveling and experiencing the world. The 336M is the latest addition to the M-Class series. It features a beautiful garage that is over 200 cubic feet in size and is placed beneath the back bedroom. It is possible to lift the bed, thus increasing the top of the garage area, to generate more parking space. The garage is right adjacent to a gas station with a 30-gallon capacity. The interior has a lot of drawers and cupboards, and the transition from the bedroom to the bathroom is really easy to maneuver through. The kitchen is positioned at the bottom of the stairs and includes a large 18 cubic foot refrigerator, a stand-alone island, and a fully equipped butler's pantry. The kitchen is just a few steps away from the front living room, which has two couches that convert to theater seats and a spectacular telescopic TV that emerges from the fireplace. In the 349M, the garage length was expanded to 13 feet in length. In addition, there are hookups for a washer and dryer underneath the upper bunk bed, and you have the option of installing a partial bathroom. A huge couch sits four people and faces the extensive entertainment center, drastically changing the aspect of the living and dining space. The 349M is also the first Momentum M-Class to include a skylight, allowing for more than 6'6" of headroom, as well as a sunken tub/shower in the bathroom. These two features are unique to the 349M. Finally, starting with the 349M, a fuel station with a capacity of 60 gallons is standard. The washer and dryer are relocated to the master bedroom, which is bookended by two large closets on either side of the front wall. A half bathroom is also now a standard fixture in the M-Class. On the island, there is also a large sink made of stainless steel, as well as seats for two. The 381MS is the first Momentum M-Class with a 15-foot garage, making it suitable for individuals who require additional space. Furthermore, the master bedroom has a one-of-a-kind cupboard that can be flipped up and concealed to show a space large enough to fit your favourite high-definition television. With two distinct pullout sofas and theater seats, the 395MS Momentum reorganizes the entire feel of the floorspace by separating the living room from the kitchen and providing a sensation of seclusion. Furthermore, the living room is separated from the dining room. You don't have an island in your kitchen; instead, you have a large L-shaped counter surface and a free-standing dinette where you may cook and eat your meals. The 398M is the largest model of the M-Class, and it includes all of the conveniences mentioned thus far, as well as a massive 18-foot garage, two full sets of Happi-Jack bunks, and ample sleeping space for up to eight people.

The 2023 Grand Design Momentum M-Class Toy Haulers for Sale Denton Little Elm Flower Mound guarantees your time outdoors will be improved by a variety of cutting-edge amenities. Let's start by talking about how to utilize the shade that is now available to you. Two independent powered awnings, one for the garage and one for the main coach, are standard on every M-Class vehicle. Both of these awnings can be managed from a panel inside the RV. You could discover that you like spending more time outside because they protect you from the sun and the rain. You can enjoy well-lit evenings thanks to a stealth LED lighting strip that has been subtly inserted inside the awnings. Except for the 336M, which has a single set of entry-steps between the garage and living space, every M-Class model has two distinct entrances, one for the garage and one for the coach, each with aluminum quad entry steps. Near the doorways, conveniently placed water nozzles wash your feet and stop you from tracking dirt inside. The outside package includes a single exterior utility hub that allows you to control all of your water and flush tanks. The zero-degree rating ensures that the frigid temperatures stay outside, where they belong, and the metal slam locks guarantee secure fits on your outdoor storage containers. All of the water tanks and pipes on the Momentum are protected by heating, triple insulation, airtight sealing, and 12-volt tank warmers. The Front and Rear Under Unit Blue LED Lights are one of the more recent modifications that have been made. Your campsite will stand out thanks to the light that shines from underneath the RV. The 300-watt amplifier and 12-inch subwoofer found in the Rockford Fosgate speakers are fully compatible with Bluetooth, and the speakers have the ability to deliver deep bass. Because it is designed specifically for toy haulers and has a capacity of sixty gallons, the fuel station gives you the ability to transport all of the fuel that your toys require and gives you 24 hour access to it. 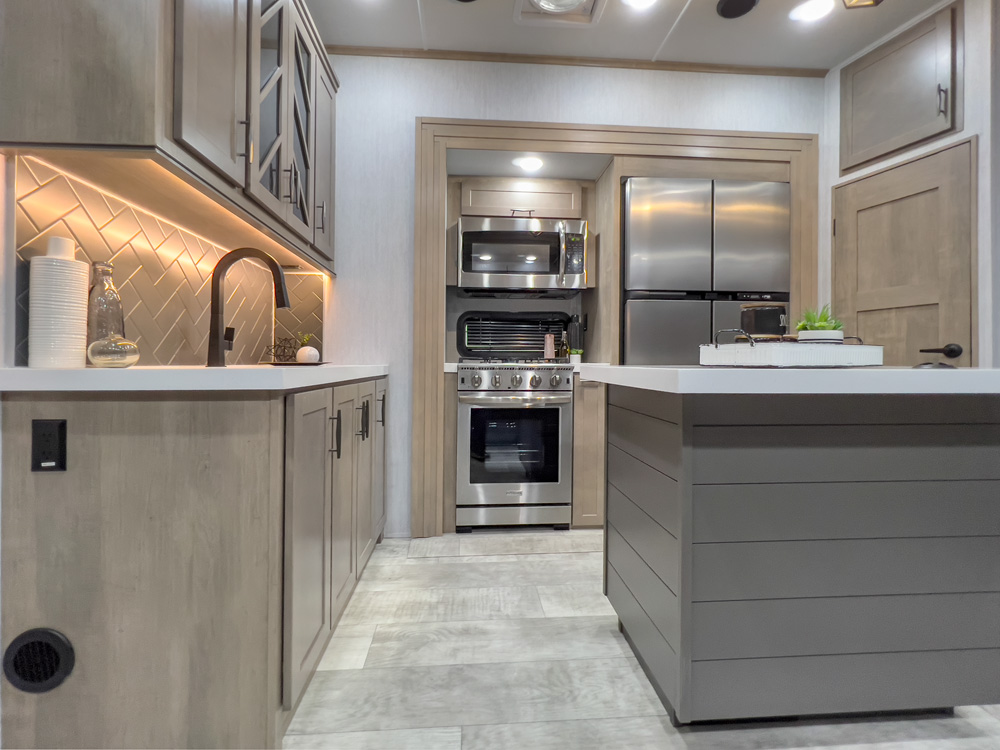 The 2023 Grand Design Momentum M-Class Toy Haulers for Sale Denton Little Elm Flower Mound TX are among of the roomiest and most luxurious toy haulers you can find. The M-Class's garage side walls are protected by diamond plating, the floor is built of oil- and gas-resistant tuff-ply, and there are 2500-pound tie down mounts to stop your toys from sliding around within the garage. The Happi-Jack system makes it possible to add another set of bunk beds. The bunks may be raised or lowered using powered rails so they can be utilized as storage or as a place to sleep. Overhead, there are two more sets of bunk beds, each with a television and much more space. Premium stoves from the Insignia series can be found when you open the door from the garage into the kitchen. These stoves each have four burner tops and an oven with a 3.7 cubic foot capacity. The total BTU capacity of these ovens is 42,500 BTU. The additional counter space offered by models with islands can be used for meal preparation or just for relaxing. Deep-basin stainless steel sinks are coupled with tall faucets and sprayers that have a bronze patina. There are multiple overhead cabinets and spacious pantries with ample storage space for dry products. Every living room has a large couch that can be crammed with pillows and blankets for the perfect place to unwind. HD televisions and electric fireplaces with a 5,000 BTU heating capability are characteristics of entertainment centers. The coach's antique bronze finish is present on all of the shower heads and sink fixtures, giving it a genuinely upscale appearance. Skylights above the shower, real porcelain toilets, and glass shower doors are a few amenities that highlight how opulent the space is. The 110v and USB outlets conveniently situated by your nightstand let you to keep all of your electronic gadgets charged. The roomy drawers and closets ensure that everything will have a home, and some M-Class models even include walk-in closets large enough to accommodate a washing machine and dryer. 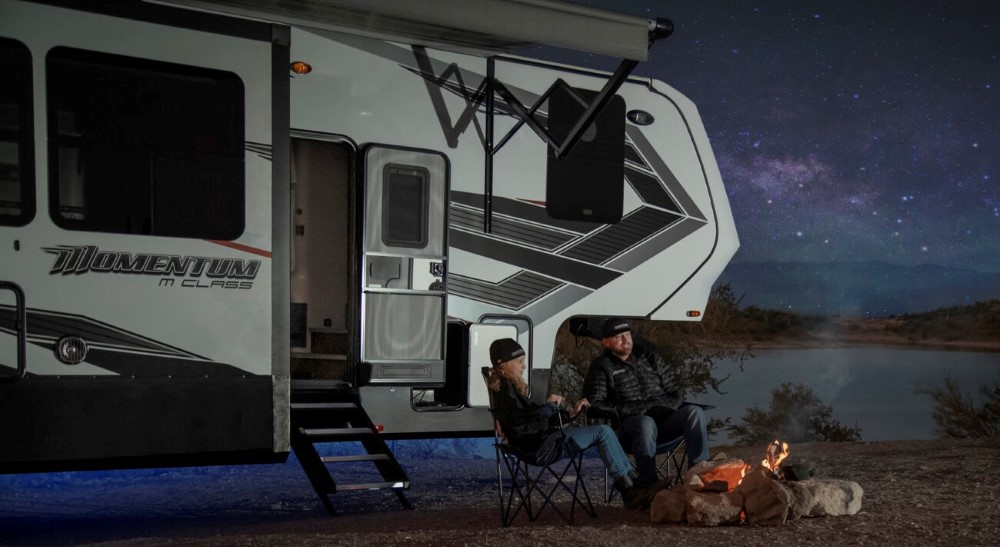 The 2023 Grand Design Momentum M-Class Toy Hauler for Sale Denton Little Elm Flower Mound is unmatched in this class of toy haulers, providing customers with an exceptional level of luxury. Momentum M-Class has more convenience features than any other fifth wheel in its class and is the most capable toy hauler in its class in terms of capacity. Grand Design has strict manufacturing standards in place, and as a result, the M-Class has gone through more than 300 different inspection points. Both at the plant and their specialist off-site pre-delivery facility, these tests have been carried out. They are confident in their dedication to quality as evidenced by the fact that they still offer customer service and warranties. No matter how they are used, Momentum M-Classes give their owners peace of mind thanks to the three-year structural warranty. Additionally, the M-Class was created to optimize your enjoyment! It enables its users to pack everything they need to participate in a variety of activities, and at the conclusion of the day, it helps them to relax and sleep. There is a whole other world of pleasure waiting for you outside of the Momentum M-Class, so get out there and live the adventure!